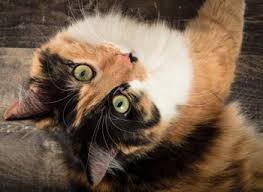 Cats are one of the most interesting species on the planet. If you have ever lived with a cat, you know why.

As soon as I said hello I could hear Ula sobbing. “Mr. Joe, oh Mr. Joe, this poor kitty. I can’t believe this.” She stopped because her tears were causing her voice to choke and the words could no longer come out. Ula is an animal rescuer, hardwired for this work. But she has no money to pay for animal communication, and in trying to build a business I’ve had to cut back on pro bono sessions.

But a voice inside me said, “Go ahead.” Besides, I was wearing my favorite red sweatshirt, the one I so dearly love. And, after weeks of daily rain, the sun had finally begun to shine.

“Ula, slow down and tell me what happened.” She had rescued twenty kittens and had found homes for many of them. One seven-month-old kitten had gone to the home of a well-to-do couple, a home which Ula thought would be stable.

“I went over there to check on the kitten,” she told me. “But the woman didn’t answer so I looked through a window. Then the woman came out and told me that if I didn’t leave she would call the police. When the police came I found out the woman had taken the cat to the shelter the day after I had brought her to the woman’s house.”

I was beginning to piece the story together. Then Ula started sobbing harder. “So yesterday I went to the shelter and they said they kept the kitten for seven days. But that’s all they could do.”

“Yes, and it’s my fault. If only I had come to the shelter a day earlier. I would have gotten her out. I told the woman that if she didn’t want the cat to call me. I would take her back. But she never called.”

“Ok, I got it. Give me a minute.” I let Ula cry and I connected to what had happened at the house. The woman was ill-tempered and mean. The young female cat had scratched one of the woman’s favorite chairs. I could see it clearly. So she simply drove to the shelter and dropped the cat off, claiming it was a stray.

Then I searched for what I wanted to know: why had this happened? There was a reason for all of this. And then it all came to me in an instant.

“Yes,” she said, but she kept crying.

“You took that cat to this woman because you thought her material wealth, her nice home, meant stability and safety for this cat. But this happened in order to teach you a lesson. And this cat agreed to teach you this lesson.”

“You placed your faith in material appearance over the true warmth of a good home. This woman is angry and has a temper, doesn’t she?”

“Ula, the cat came to teach you this lesson. That you must look for the home that has the right feeling, and quit thinking about the outside appearance.” I saw an image of a poor family who would have given the cat a home with love.

“Give me a minute, Ula.” I knew where I wanted to go next. I found the cat in the spirit world, and she was smiling. She told me that she had agreed to do this for Ula, but that while in her body the time in the shelter scared her badly. She died afraid. The young cat also had an important message for me to give to Ula.

“Ula, there is no such thing as hate in the spirit world. It doesn’t exist. Listen to me. This is what you need to know. You can’t save them all. You’re not meant to. This earth is a hard place, a hard school.”

Her crying intensified and she finally let it all out. As if the dam—the years of seeing animals suffer hunger and loneliness, cold and neglect, abuse and painful death–finally broke.

“When the animals I’ve got now are all gone, if there is a heaven, if I can get in, I just want to die and go there. I’ll never forgive myself.”

I let her cry for a while, and decided to not tell her the rest of what I knew.