A psychopomp is one who guides souls across to the other side. In shamanic animal healing, we call on a psychopomp, or emmisary, to help an animal cross over. I’ve done this many times for other people’s pets; but this time, I’d have to do psychopomp for our own cat, Thomas.

He came out of the county shelter at eight weeks, walked into the front door, ignored the dominant seven-year-old Calico hissing at him, walked over to her food bowl, and started helping himself.

He could jump from the floor seven feet straight up to the basement rafters, he could stare down a 120-pound German Shepherd and let him know who was smarter; he’d sit in front of the keyboard for hours while I worked and would sleep on the couch while the best sun of the day streamed through the window and across his body.

But almost 18 years of living and a chronic thyroid deficiency caught up with him. I sensed the weekend before Thanksgiving would be his last.

On Friday morning I underwent a shamanic journey to initiate psychopomp.

All the times I had done this for other animals the guide—the psychopomp—had come for them. And this time was no different.

In the journey a sleek, beige Persian named Jillian came and said she would stay with Thomas until his crossing. Then she and Thomas and I travelled in our shamanic journey to meet one of my guides, Ilkael, master of spiral healing and lover of cats.

In the journey he escorted Thomas into a sacred circle. Then he brought out a wooden staff with a diamond enclosed within an arch at the top of the staff. From the diamond he concentrated a bright white light onto Thomas’s body. After a minute of this diamond light pouring into it, the cat body dropped to the ground, flat and lifeless. Then Thomas emerged from the remains and floated above them in mid air, white, translucent, glowing.

I thanked Ilkael and Jillian the psychopomp, and ended the journey.

By Saturday I had to carry Thomas to the water bowl—he could barely walk on his own. But his breathing stayed even, and he didn’t seem to be in pain.

“Don’t let him suffer,” my wife had said to me before having to go out of town that weekend.

“I won’t,” I had told her. “I promise.” But now, instead of calmly talking to other people’s animals and asking how they wanted to cross over, I had to care for my own, in my own home, and just my two young daughters to help.

With a vow to not let him suffer and a promise to not take his life.

That night I spread a sleeping bag on the family room floor next to his cat bed, and watched a movie with my daughters. After they went upstairs I turned out the lights and stayed with Thomas.

At 5AM I woke and saw him stretched out on the carpet three feet from his cat bed. He had crawled out of his bed during the night but got no farther. Though still breathing softly, he couldn’t walk or even stand. I picked him up and held him close to my face. He felt like a drying dishrag in my hands.

I placed him back in his soft cat bed and leaned over him. One by one I opened each of his seven chakras with my right hand, preparing him to leave his body. Then I sat next to him and began another shamanic journey.

I met Ilkael and the psychopomp Jillian again in the sacred circle. Thomas’s flattened form lay in the same spot on the ground where I had seen it in the previous journey. Then suddenly a large tree, full of strong green leaves, shot out of the ground from Thomas’s lifeless form. The tree rose into the sky impossibly tall, as if from one of Jack’s magic beans.

And then I knew how Jillian and Thomas would leave.

After ending the journey, I read Ecclesiastes out loud to Thomas and listened for his breathing. About an hour later later, while my daughters still slept, Thomas quietly stopped breathing.

Tears rolled down my cheeks as I sat on the floor next to him. And that’s when I said to the Spirits, “Ok, I’ve done everything you’ve asked. I’ve given you everything. He didn’t suffer. Are you happy now?”

Then, as clear as I can see the sun in the morning, I saw Jillian walk up to me, put her two front paws lightly on my right collar bone, and lick my tears away. She smiled, and then she and Thomas scampered up the tree, disappearing into the green leaves. 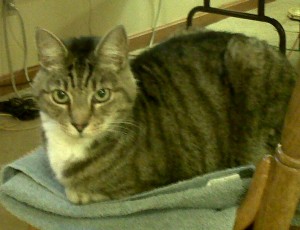