Two women approached as I played with my Appaloosa on a clear Sunday morning. ‘We’ve come to see Lucky,” the younger one said. “This is my mother. Lucky was hers.”

I didn’t know why Lucky had ended up at the rescue, and I never asked. The hardest days since the Great Depression had come to Ohio, and many horses were surrendered to rescues, auctioned for slaughter in Mexico, or simply taken to the state park and released.

Lucky lay on his side a few yards from me, breathing in the golden sunshine. He was old and tired, and loved to stretch out in the grass. 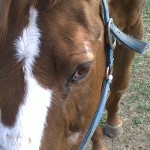 These would be Lucky’s last days in the sun. He would suffer too much during the coming winter, and even he seemed to know he wouldn’t live till the first snow.

A few minutes later, while playing hide-the-carrot with my horse, I glanced over at the two ladies. The older woman had laid her head on her daughter’s shoulder; tears slid down her cheeks.

Seeing the two women like this reminded of the day I had stopped to visit Lucky in his stall. He had pushed his entire neck through the gap in the stall bars, and laid his head on my shoulder. Just like the older woman was doing now with her daughter.

Three weeks later, Kathy stood in the pasture alongside the pond. She was the volunteer who had cared for Lucky most faithfully: she talked to him, led him from the pasture to the barn, and fed him the mints he loved. She had given up a day of work to be with him now.

When Kathy and I had spoken the night before, I told her what Lucky had said. He wanted Kathy with him, but he didn’t want her to cry. “Tell her to look me in the eye,” he said. Then I told her how to open his chakras so his spirit could more easily pass.

Kathy watched as the vet prepared the tube that would go into Lucky’s neck. Sundance lay on his side nearby, his turn already come.

The vet placed the big needle into the open end of the tube, and pressed down on the plunger. Lucky’s front legs crumpled, and his head bounced hard off the ground. Blood spat from his mouth. Then he lay quietly on his side, no longer breathing.

The vet and two other women from the rescue left so Kathy could be alone with Lucky.

She knelt by his side and, with her open palm, drew a counterclockwise circle above each of his chakras. Then she stretched out alongside him and placed her head on his face. And talked quietly to him.

His eyes, she saw, were clear and alive, as if he were still breathing. She kept talking to him, telling him how happy he was going to be now. Then she saw it.

His head popped out of the body first.

Brown yet translucent, Lucky looked straight at Kathy as if he himself were surprised. Then the rest of him came out of his old body and stood a few feet off the ground in front of her.

He looked young and strong and muscular. And he kicked his legs to show Kathy they were no longer the old and feeble ones that would barely hold his weight.

For a minute or two Lucky took joy in showing off his young, strong body. Then he looked at Kathy, turned, and galloped off.

Before she left Kathy looked into the eyes of his dead body—they were as hard as marble.

“I wasn’t shocked,” Kathy told me afterwards. “But it was an experience I’ll never forget.”

She thanked me, and said she couldn’t have done it without me. But I hadn’t really done anything.

She and the old brown horse had made their own luck that day, the two of them together.