You are here: Home / Dogs / Street Dogs On The Moon

It was July — the middle of winter — but we were able to eat lunch at an outdoor Santiago cafe. A pale winter sun shone on our faces, and the cold Andean wind  pushed down the sidewalk and through my jacket.

“Joe, don’t you like chicken?” Michelle asked. She was from Brazil, and so was Hugo. Ricardo, sitting across from me, and his friend  Patricio were both from Argentina. Gil and and I had traveled from the United States. We had all come to Santiago, Chile to work together on a project.

“You don’t eat meat? Argh, Americans!” She laughed as she took another bite.

I smiled. “I don’t, but those street dogs down on the corner do. I’ll save some for them.” As I ate my salad I picked out the chicken pieces and placed them on the white paper napkin.

Ricardo took out his wallet and showed me a picture of his son and daughter. “I miss them,” he said.

Walking back to the office in downtown Santiago, I remembered the corner where the two street dogs were. I had seen them on our way to the cafe. The small tan dog lay on the sidewalk, just outside a doorway to an office building. I offered him a piece of chicken, but he didn’t move.

I turned and walked a few feet to the other dog, this one larger, with the pointed ears and black/tan markings of a German Shepherd. He slept deeply on the sidewalk, undisturbed, as if on another planet.

I slipped my right hand under his muzzle and lifted his head. Then I put a piece of chicken against his nose. He opened his startled eyes, sniffed the chicken  — and softly opened his mouth.

I could feel people brush past me but they too seemed to be on that far away planet. I focused only on this dog, caressing his soft head with my left hand while I fed him all the chicken I’d saved.

“I don’t know,” I told him. “But he was hungry.” As we walked away I looked back and saw that he’d returned to his deep afternoon nap.

Crossing At the Light

There are over 200,000 street dogs in Santiago. You see them standing on street corners, lying on the sidewalks, walking through the parks, trotting behind pedestrians in the early morning rush hour. As if they too had a job to get to by nine.

No one bothered the ones I saw, and they lived freely among the inhabitants of this Andean city. These street dogs, I’m sure, knew hunger and cold; yet they lived openly, and with a slight smile on their faces.

Did they have a secret they kept to themselves to be smiling like that? Something only they knew?

Maybe it was as simple as living life day-to-day on their own terms. For however many days they had.

While I waited in downtown Santiago for the red tour bus, I thought of the dogs in some of the shelters back home. They didn’t live quite so freely.

Any dog caught roaming the street without ID tags would be incarcerated and, unless he were lucky, killed (“euthanized”). Over 50% of the 2 million dogs who enter a shelter in the US each year never make it out. 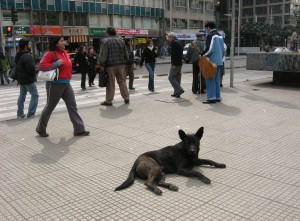 I looked again for the tour bus, and saw a street dog sitting at the busy intersection just to my left. Next to him stood a policeman. The policeman would walk out into the middle of the narrow street to direct traffic, then return to the sidewalk. The dog watched the people and the policeman and the traffic for ten  minutes or so.

Finally, deciding that it was time to move on, the dog waited until the light turned green. Then he crossed the street along with the pedestrians and disappeared down the sidewalk.

With Your Feet on the Moon

The Brazilians laughed and talked in Portuguese as we walked back to our hotel from the pub. It was our last night in Santiago, and we had watched Brazil defeat Ecuador in a soccer match over a couple of beers. One of the Brazilians, unaccustomed to the cold night air of the Andes, shivered as his wife wrapped her arm around his shoulder to keep him warm.

We walked uphill, toward the mountains in the distance…a mile back to our hotel along curving sidewalks.

As I talked with Leandro, we walked past two street dogs standing near the curb, staring at us. They were both as black as the tires on a car, medium sized, with fine silky hair. I stopped and called to them.

The shorter one opened his mouth into a smile, and walked over to me. He limped on his right rear leg. His buddy followed, close to his friend’s side.

I placed my hand on the limping dog’s right shoulder and, for some reason I can’t remember, decided to put some energy healing into him. He leaned into my leg, and I could feel the Reiki flow through me and into him. Then, after a few minutes, I continued with Leandro down the sidewalk.

The smiling dog with the limp followed us … and the second dog stuck by his friend’s side.

Up the sidewalk we walked as it curved through the cold air coming down from the surrounding mountains. I looked up and saw a  billboard selling new homes in the foothills of the Andes. It read Con Los Pies En La Luna (‘With Your feet On The Moon”).

We kept walking, and the two Santiago street dogs followed. “Joey,” Leandro laughed, “you can’t take them home with you.”

We crossed a bridge high above a dry river bed below, and saw our hotel up the hill to our left. Between the bridge and the hotel ran a four-lane road which was tricky to cross even during the day: the cars flew by at forty miles an hour around a curve.

The Brazilians continued to talk and laugh as we walked, and the street dogs continued to follow us, playing with each other and smiling at us.

Would they follow us across this busy street, I wondered? How could they make it?

When the crossing signal turned green, I said a quick prayer for the two street dogs and focused on getting across that four-lane road. When I reached the other side of the road, the limping dog greeted me with a smile.

As if he knew something I didn’t.

Then he and his friend sat down on the sidewalk to have their photo snapped with one of the Brazilians. The man  laughed and hugged the dogs, one in each arm.

Before going into the hotel, I looked for the moon in the Andean sky, but didn’t see it.

No matter…I finally figured it out.

The moon was near by, and the two street dogs were almost there.

You can read more about the work Joe does with dogs and other animals by clicking here.